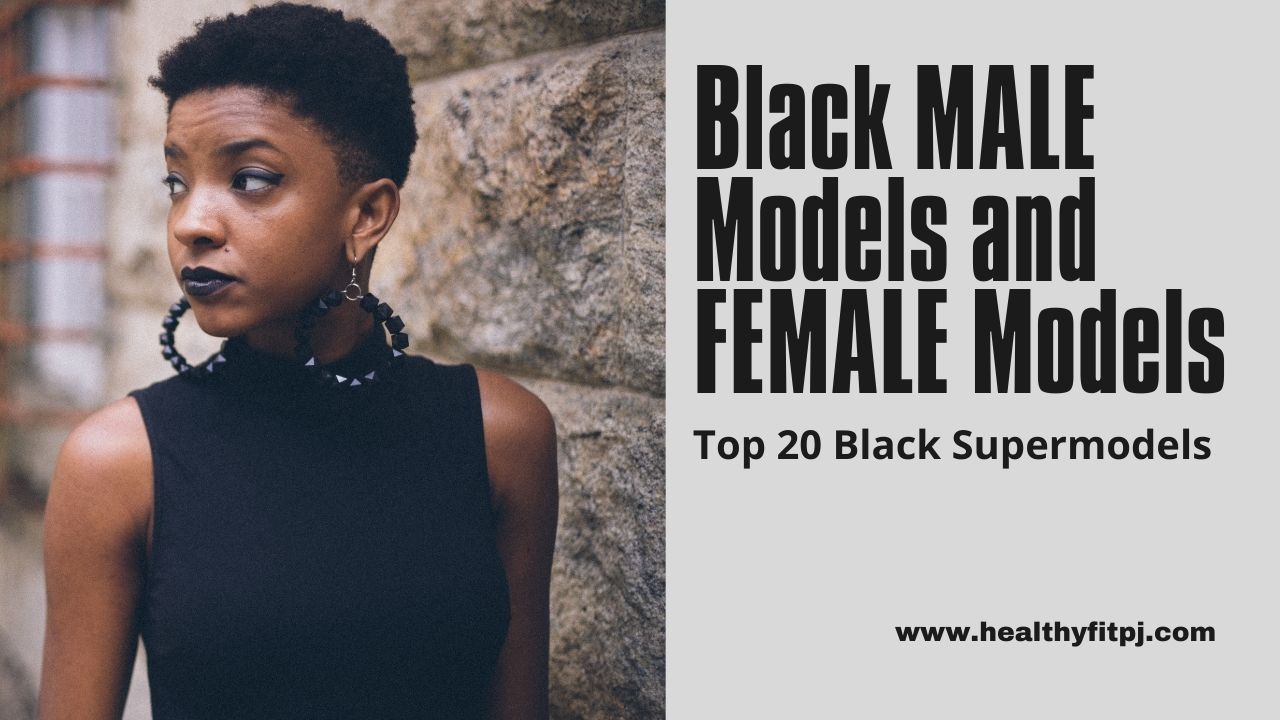 What do you think about black models? Black models are invited for high fashion weeks and photo shoots with professional photographers. Most of the black ordinary people are become the top super models in fashion industry. They are succeeded models not only their appearance but hard work also.

The top agency and fashion shown are looking for black model. Currently have high demand for black models in fashion industry. They are highly attracted to top fashion shows of the world best brands. These models are become the top face of global clothing, fashion and cosmetics brands. 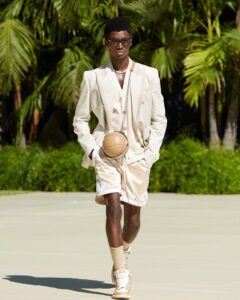 The first black super male model on almost every list is, male model of the year Alton Mason, Alton is 6 feet 2 inch, he’s only 22years old, he’s half jamaic an half ghanian although he grew up in the united states.

His father actually played professional basketball. Alton himself was a dancer who was discovered by his dance instructor; when he introduced him to an agency.

Alton is one of thehighest paid male model in the industry today and he’s done numerous campaigns and runway shows for just about every major fashion house. 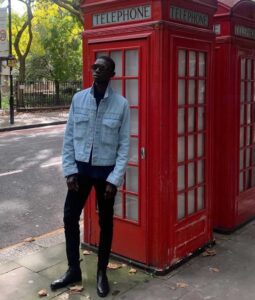 Another black super male model on the list is Fernando Cabral; Fernando is a model from guinea, although he grew up in Portugal. He actually has a brother named Armando Cabral; who was a former model now turned shoes designer.

He was discovered by character models 10 years ago and he appeared in an H & M campaign with his brother Armando Cabral. Since then he’s become the face of Tom Ford he’s done ads for H & M, Hugo boss and J.Crew.

He’s known for his dark skin and high cheekbones and this makes him one of the highest paid models in the industry today. 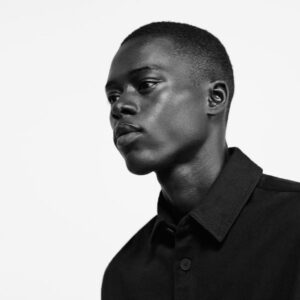 Another black super male model on this list is Senegal model Alpha Dia, Alpha is quickly growing in popularity; he was first discovered while he worked at a bar in Hamburg Germany by a photographer who introduced him to an agency.

Alpha is an outspoken activist against racism because he like other models has also experienced racism towards black male models. 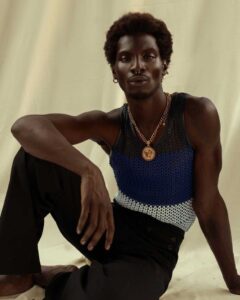 Another black super male model is Adonis Bosso, Adonis is with DNA models, he’s from Ivory Coast originally, he was first discovered when he actually took his girlfriend to an open call and then they both ended up getting signed by agency. 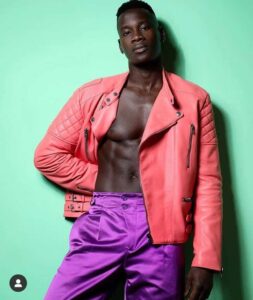 Next black super male model on the list is David Agbodji, David is a 32 year old model, he’s from togo and born in paris.

He spent 10 years in moscow and while he was there he actually wasn’t interested in becoming a model. It wasn’t until his friends convinced him to become a model.

He finally went to an agency and got his career started. Since moving to New York he’s taken a passion in photography and he also does some photography on the side, but his biggest passion is actually Kickboxing, Muay Thai and mixed martial arts,

David has a nice body of work, he was once the face of Calvin Klein and he’s also been featured in numerous campaigns for major fashion lines. 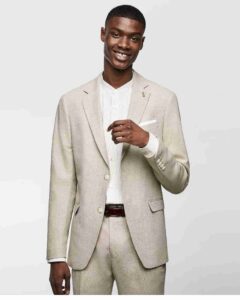 Another black Super male model in this list is Rachide Embalo, Rachide is from guinea-bissau, although he grew up in Portugal.

He was scouted at a school event in Lisbon, since then he signed with a mother agency and more recently he actually opened and closed the runway show for balmain. 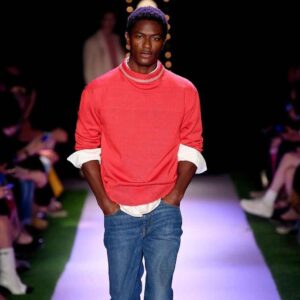 Another black super model is Hamid Onifade, Hamid he was born in Paris. He first got signed when he went to a red model’s open call with a friend of his and then they ended up both getting signed to the agency. 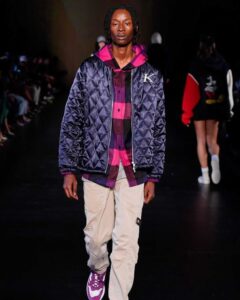 Another black super model is Abdulaye niang, he goes by A B for short, and A B is a fashion enthusiast, he is born in Staten Island New York. He’s been casted in a number of mainstream fashion shows and he’s also been featured in Vogue Magazine. 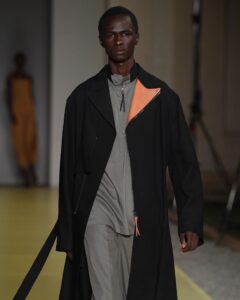 ​Another black super male model is Malick Bodian, he’s from Senegal and if there’s anything the fashion industry loves is Senegal else models.

Malick was raised in italy and he was first scouted on instagram and within three months he was walking for milan fashion week and london new york fashion week for major designers like Louis Vuitton, Alexander McQueen and more. 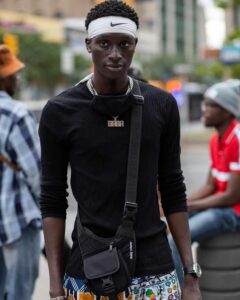 Another super male model is Baba Diop, Baba is also from Senegal although he was born in Harlem New York, he’s 6 feet 2 inch, only 23 years old and he signed with Red models.

He was once the face of louis Vuitton and not only is he a model he’s also a poet and a digital artist. these are Black Male Models who are working in fashion industry. 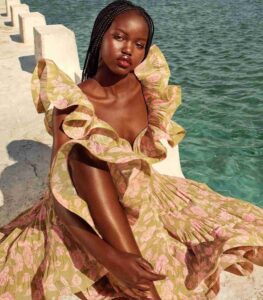 The top black super female model is back to back model of the Year winner Adut Akech, Adut is a Sudanese model although she spent most of her years in Australia. Adut was born on Christmas Day and on a personal note she actually spent a lot of her childhood as a refugee.

She’s currently working for the United Nations to promote refugee causes, her first debut in modeling was for Saint Lauren and so far this in 2020 she’s done over 20 editorial campaigns and books to numerous runway shows. 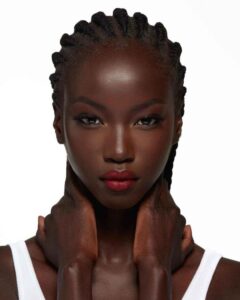 Another top black super female model on the list is Anok Yai, Anok is a South Sudanese model who was born in Egypt but grew up in the United States.

She was first discovered an Instagram; when a photographer posted an image of her at Howard University’s homecoming week, after that image went viral she actually got a lot of requests from modeling agencies who were requesting to see her, but ultimately she signed with next models and soon became the face of Estee Lauder.

In 2020 she’s done over 20 editorial campaigns and booked numerous runway shows. She’s one of the top models in the industry today. 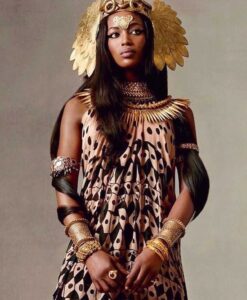 Next top black super female model on this list is the Queen, supermodel Naomi Campbell, Naomi Campbell has been modeling since she was 15, and she first appeared in a music video for Bob Marley.

She undisputedly has the best catwalk of any model on the runway of all time. Naomi Campbell is almost 50 year old; she still wanted the top models in the industry today and she’s still getting books for editorials and runway shows. This goes to show you that you could still be in the top of your game at any age. 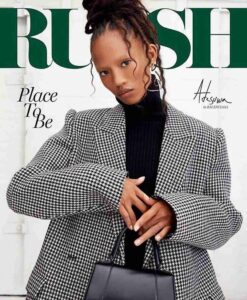 Next top black female model on the list is Adesuwa Aighewi, she is half Nigerian and half Chinese; although her mother was born in Thailand.

She basically wanted to be a doctor and she was studied medicine but soon realized that she could make much money in modelling. She was actually disowned by her parents because of modeling. Her passion is in filmmaking and she has a film called spring in Harlem which is focused on the beauty of Muslim. 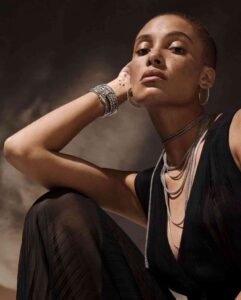 Another black super female model on the list is an Adwoa Aboah, she’s half Ghani and half British. She actually worked as a stylist and a creative director for several designers before she got her big break in modeling.

She got her start when a photographer shot her for Vogue Italia and on a personal note she also has a project called the girls talk projects, where she talks about her previous battle with addiction and depression. 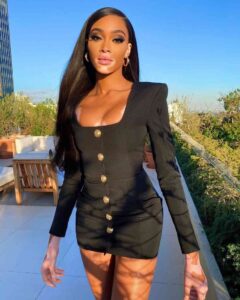 Another black top female model is Winnie Harlow, who was also discovered on America’s Next Top Model by Tyra Banks.

She was eliminated the second week of the show but then brought back and finally eliminated a week 13 where she took sixth place.

After the show her career took off and she began doing major campaigns at runway shows for top designers. She’s done over five campaigns and walked for numerous designers. 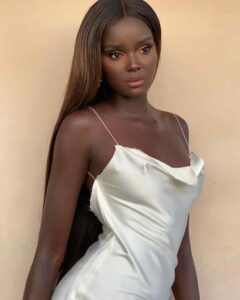 Another black super female model on the list is duckie; she’s originally from South Sudan although she grew up in Australia. She was discovered in Australia’s Top Model Cycle 8, where she finished third place.

After the competition she moved to New York to advance her career and she first modeled for easy in 2017 and soon after became the face of Fanta beauty by Rihanna. 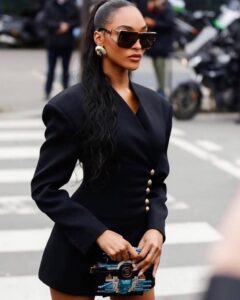 Another black super female model on the list is Jourdan Dunn, she would have been higher on this list but she actually recently got engaged and she’s taking a mini break from modeling.

She’s 6 feet although she’s often listed as 5 feet 10 inch or 5 feet 11 inch to make her more marketable. She’s a British model with a supermodel status, she was formerly the face of Maybelline and she’s a three-time model of the Year. 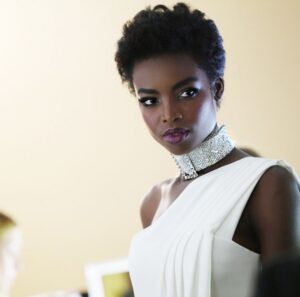 Another black super female model on the list is Angolan model Maria Borges; she was also discovered on Elite Model Look, where she took second place, since then she’s model for Victoria’s Secret for four years.

She was actually the first black model to model for Victoria’s Secret while sporting her natural Afro hairstyle. 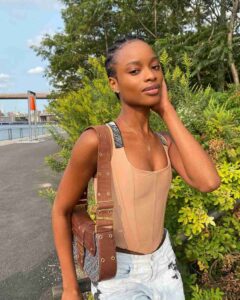 Another black super female model is Mayowa Nicholas; Mayowa is a Nigerian model who was discovered when she participated in Elite Model Look. She was a finalist in a competition and from there her career started.

She shares the same birthday as Naomi Campbell, she’s 5 feet 11 inch and her career has only just begun.