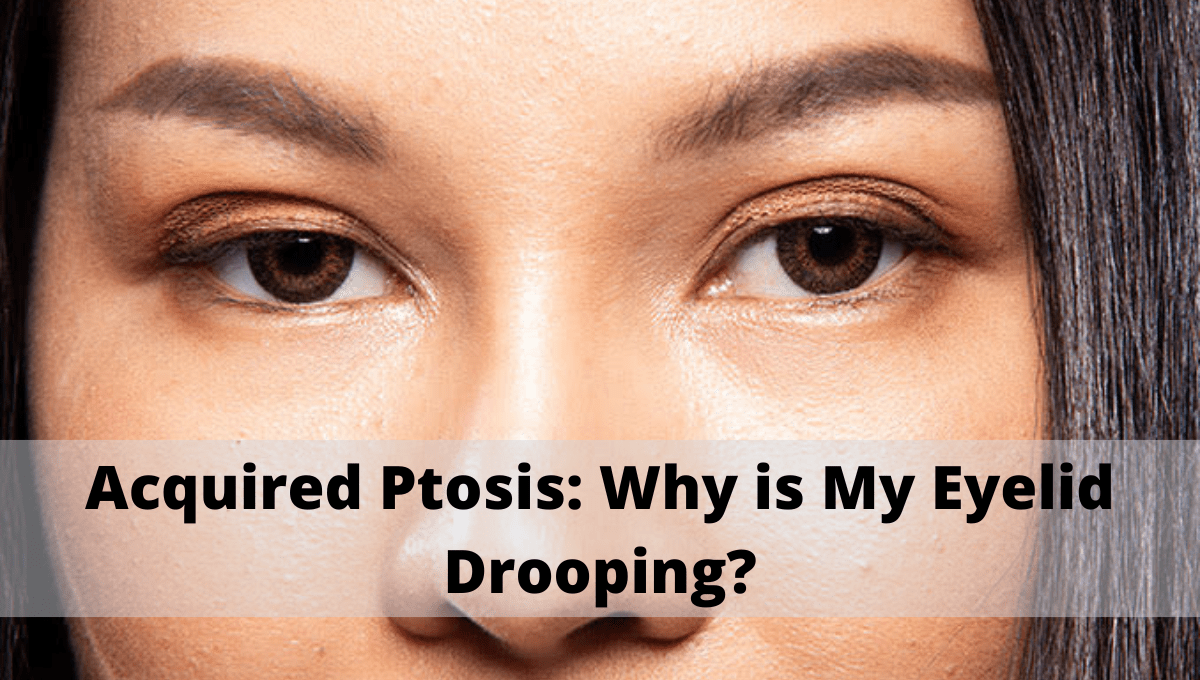 Acquired ptosis, characterized by droopy eyelids, can limit your ability to see clearly, affecting your day-to-day activities, such as driving, walking, exercising, etc. This condition is common among adults but could affect anyone, including children and teens. If you are beginning to witness vision difficulties due to droopy eyelids, you could be suffering from acquired ptosis. We have covered more about this eye condition, from the causes and symptoms to treatment options.

Ptosis can be classified into two, congenital and acquired ptosis. Congenital ptosis is caused by genetics and is present at birth. On the other hand, acquired ptosis develops over the person’s lifetime and could be caused by several factors. Typically, the eyelids begin to drop and eventually causes vision problem. The condition may worsen without the right treatment plan, adversely affecting a person’s quality of life.

Acquired ptosis may develop from various underlying conditions, which could be expedited by other risk factors such as age. One of the leading causes of droopy eyelids is the tearing or stretching of the levator aponeurosis. This is a tendon-like envelope that allows the eyelid to open and close. Damage to this delicate tissue often occurs from:

The other factors that can cause acquired ptosis include underlying eye conditions such as eyelid tumors, swelling, and cysts. More rare but uncommon conditions like Horner’s syndrome also play a role in the development of acquired ptosis.

Acquired ptosis is broadly classified into five based on its causes, severity, and how they develop over time. These types include:

This occurs when the levator muscle, responsible for elevating the upper eyelid, weakens due to aging. People suffering from aponeurotic ptosis have difficulty lifting their eyelids into the correct position.

This acquired ptosis occurs when the eyelid(s) become too heavy for the eye muscles to lift. The leading cause of mechanical ptosis is the presence of an eyelid tumor or growth that becomes heavier with time. A standard solution to this problem is to remove the tumor or growth causing the excessive strain on the eye muscle.

Unlike the other types of acquired ptosis, which are directly caused by issues with the levator muscle, neurogenic ptosis is caused by nerve damage or problems with the central nervous system.

As the name suggests, traumatic ptosis occurs following some physical injury or trauma to the sensitive eye muscles and tissues. More often, such injuries must be severe enough to affect the levator tendon or the third nerve.

Spotting acquired ptosis in their early developmental stage allows you or your loved one to seek treatment as soon as possible. Common symptoms to look out for include:

Other symptoms such as double vision and crossed eyes could indicate serious underlying issues; hence it’s crucial to consult your optometrist. Double vision is an eye condition where a person sees two images instead of one. Crossed eyes or strabismus is an eye disorder where the eyes aren’t properly aligned, especially when looking at an object.

More often, acquired ptosis can be treated through medical intervention; however, this depends on severity. If the droopy eyelids are causing vision problems and discomfort or there’s an underlying health concern, it’s advisable to seek medical attention. In specific cases, surgery is recommended, with the main aim of tightening the levator muscle or repairing the levator aponeurosis. And while complications resulting from surgery are rare, they aren’t uncommon.

Another treatment option that’s gaining popularity is the use of eye drops to treat ptosis. This option is minimally invasive, allowing more patients to qualify for treatment without the risk of adverse side effects. An example is Upneeq, the only FDA-approved prescription eyedrop that, with time, helps lift the upper eyelid.

Acquired ptosis can be mild, severe, temporary, or permanent. The condition is barely noticeable in most people and may not need any medical intervention. In younger patients, ptosis and its symptoms may disappear, even without treatment. However, you want to consult your doctor if the condition affects your quality of life. And while some cases of acquired ptosis cannot be cured, the proper treatment can help manage the condition.